A few months back I received a gift of a Beer of the Month Club membership. I honestly have not had much to speak about from my deliveries; however, this week I received a beer which peaked my interest from Tommyknocker Brewery in Idaho Springs, Colorado. I am going to take a look at their Maple Nut Brown. Not a rare beer find or anything, as they distribute to over half the country and I have actually seen this beer at my local store. I have only had one beer with maple in it and that was Rogue’s Maple Bacon which was in my opinion a bit of a disaster. I have to think I can find better uses of maple out there.

My first question about this brewery is: Why the name Tommyknocker? Well, the brewery is located in a small Colorado mining town and Tommy Knockers are mythical creatures which live under ground in the mines. These creatures apparently are known to notify miners when a collapse is looming by making knocking sounds with rocks. Furthermore, they are usually the first suspect when I miner lost tools or were broken.

Couple of other quick facts about old Tommyknocker Brewery. The brewpub was founded in 1994, the town is at an elevation of 7500 feet, and they also make four types of soda. Wow! 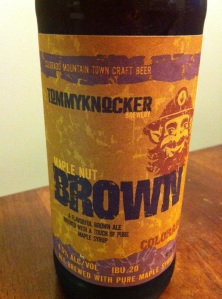 Maple Nut Brown is brewed with Perle and Willamette hops alongside 2-row, Munich, Crystal (75&150), Carapils, and Chocolate malts. As mentioned above and in the name, there is dash of maple syrup in the mix. The ABV is 4.5% and IBU level clocks in at 20. Let’s drink.

I am pouring a 12 ounce bottle into a beer mug as suggested by the beer club. The recommended serving temperature is 47-52 °F, so I let the bottle sit on the counter for 10-15 minutes to let it warm up a little.

Aromas are dessert worthy with roasted and nutty notes along with a dash of brown sugar mixed in.

Tastes I pick up immediately are caramel, nutty, and vanilla, followed by a zing of maple syrup in the finish.

Mouth feel is a medium body and minimal carbonation. Not as thick or syrupy as I expected. I think when maple syrup comes to mind, those are the qualities I am expecting and thankfully that is not the case. Quite smooth really.

Overall I am pleasantly surprised with this beer. It is very easy drinking with most of the traditional nut-brown flavors and a nice subtle twist of maple. I feel like it could be better by adding a little more toasted flavor and carbonation (a bit flat for my liking). I will rate Tommyknocker Maple Nut Brown 3.75 Mugs out of 5 on the Draft Notes scale.

For more information on Tommyknocker Brewery, check them out here: http://www.tommyknocker.com/

Want to know more about Tommyknockers? Check out the American
Folklores website.