Archive for the category “North Carolina”

A couple of weeks ago I went down to the Outer Banks (Hatteras, NC) for a beach get away with my wife and some friends. Of course if I am taking a trip out of town, my first question is: Which breweries are nearby and what beers can I get not available in the VA/DC area? Fortunately the Bavarian themed Weeping Radish Farm Brewery in Grandy, North Carolina was on our way down and was immediately added to the schedule.

The bonus that comes with this brewery is “Farm” part of the name as they also have a German style butcher on site selling Brats, Keilbasa, Liverwurst, etc, etc. Now I may be crazy, but I can’t think of a better stop to make on the way to the beach where grilling and beer will be a high priority. 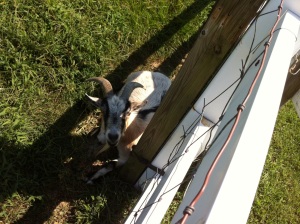 One aspect of life living in the beltway (or most other large cities) is dealing with and planning around traffic. Plan was to leave at 530am from Arlington with hopes for minimal traffic and to reach the Radish for lunch (yes, they have a restaurant too), pick up supplies, and drive the last 2 hours to Hatteras. We get on the road around 6am and it is a smooth ride out of the beltway south through Virginia. Traffic was nowhere to be seen and we are happy as could be until 4 hours pass and we arrive at the Radish at 10am, otherwise known as an hour before opening time. First off, a traffic free drive from DC through Richmond and Norfolk does not happen. The plan was solid; the traffic just did not show up. We pull into the parking lot and ask the goat (told you it was a farm) if we could get in early as no one else was to be seen. Goat says “no”, I shed a tear, and we are back on the road. Don’t worry though, other friends on the beach vacation team would be driving through the following day that would be able to pick up supplies and save the week. I also would be able to stop by on the way home to get a quick look in person.

The Weeping Radish beers we had at the beach were the Corolla Gold, Fest Beer, and the Weizen. Additionally we had Beer Brats, Brats, and Andouille for the grill.

My favorite beer of this group was the Corolla Gold which is a Helles Lager and I thought the Fest Beer (Oktoberfest Marzen) was pretty good too. None of us were too impressed with the Weizen (Hefeweizen), but it was eventually finished. They sell all their beers in 22oz and kegs from what I could tell and they actually sell cases of the 22oz bottles online for $39. When we stopped in on our way home, I picked up the two beers we had not tried available in bottles to go: OBX Beer and Black Radish. OBX Beer is a Kolsch and Black Radish is a Schwarzbier/Dark German Lager.  The Black Radish, in my opinion, is clearly the gem of this brewery which you must try if you get a chance. The sausages were outstanding and we picked up some liverwurst which was really good too. All these products are made from local ingredients as part of their Farm to Fork theme. 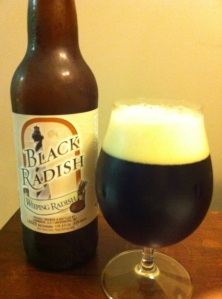 The brewery has a bar where you can try samples of their beers or just buy a pint. As noted earlier, there is also a seating section for those looking for a meal. There is a cool upstairs look out area which overlooks the brewing area, so you can watch the brewers at work filling bottles, mashing, etc.  Great idea for those who may just want a quick glance, but may not want to walk the entire tour. They do offer tours for $5 with three samples included. The tour includes a look at the meat smoke house and butchery.  Outside they have a few goats wandering around which is fitting as the brewery itself looks like a big barn. Just be careful not to touch the electric fence. I have a feeling this electric fence could be entertaining later in the day/night as people consume a few too many pints and decide to try to play with the goats.

I would definitely recommend you stop by the Weeping Radish to try their Bavarian themed beers (Don’t forget to try the Black Radish) and meats. The 22oz bottles were about $4 a piece and a 4 pack of Brats were around $8-9, so you can definitely pick up a few bottles and some Brats for a reasonable price. They have a laid back environment, obvious tight link to the community, and friendly and helpful staff.  Learn more at http://weepingradish.com/index.php. Cheers!