With the holiday season in full swing, I decided to take a look at a couple of winter seasonals before they get by me. Today I have selected a beer from in state (Virginia) brewery Starr Hill named Snow Blind. This is the first year Starr Hill has released this doppelbock lager which weighs in at 7.4% ABV and a mere 13 IBUs. I appreciate them going a less traveled winter route by choosing this style over the more common spiced up high ABV ales.

Originating in southern Germany, doppelbocks are defined by their complex malts, roasted flavors, and low bitterness. You may have noticed that many breweries choose to name their doppelbocks with a name ending with “ator”. Randy Mosher’s “Tasting Beer” explains this trend originated with Paulaner Brewery creating the first in 1629, named “Salvator”. This name was used generically to describe all doppelbocks (like in the US we use the brand Kleenex to describe a tissue) until the 20th century when Paulaner decided to protect their brand. German breweries kept the “ator” as we see in beers such as Ayinger Celebrator and Spaten Optimator. Furthermore, some American craft brewers pay homage in beers such as Troeg’s Troegenator and Bell’s Consecrator. After explaining all this you will note that Starr Hill did not follow the trend. Oh well, let’s drink.

Appearance is a deep mahogany brown with a light tan head.

Aromas I detect are chocolate, caramel, and a touch of roasted barley.

As I sip this beer, the malts are obviously dominating – no surprise there. I taste roasted flavors, sweet caramel, and then eventually boozy, coffee finish. 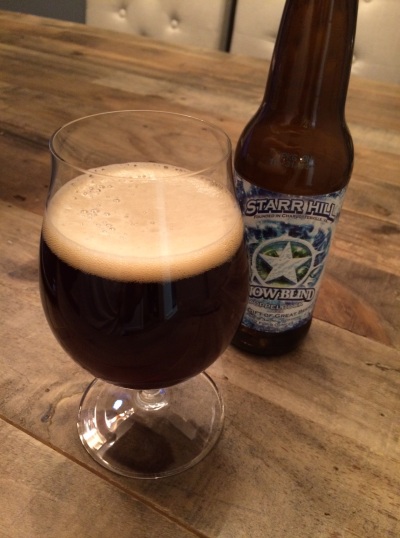 The dominant sensory impact with this beer is the mouth feel. A very heavy carbonation dominates and slowly dissipates in the mouth leaving a syrupy lip smacking finish.

Overall, I like this beer and it grows on me as I sip and write. The roasted flavors are perfect for the winter weather and dominant malts make the beer quite smooth and easy drinking. The style is not for everyone, but if you like ambers or porters you may be attracted to the malty and roasted goodness. Hop Heads need not apply.

You can read more about Starr Hill and their beers (to include Snow Blind) at http://www.starrhill.com. Their beers can be found in the Mid-Atlantic and Southeast. Personally I am a big fan of their Starr Pils and Grateful Pale Ale.