Archive for the category “Michigan”

Bells Hopslam is one of those beers with a cult following who anticipate the annual/seasonal release. It carries a lofty reputation with ratings of 100 by Beer Advocate and Rate Beer. The hype associated with this beer is evident on social networks such as Twitter and Untapped and of course as soon as I saw it was coming to my neighborhood, like a teenage girl stalking Justin Bieber, I had to find this Michigan beer.

I paid enough attention to the craft beer scene to know that 1/21 was the Virginia release week. In anticipation I was tracking my local beer stores like a hawk and finally a batch hit Arrowine who posted a note on Facebook at 11am. During my lunch break I make the call to have a 6 or two held, to my disappointment all 25 cases had sold out in an hour. F!!!. I call another small beer joint in Vienna (Norm’s) to see if they had received their delivery and sure enough it is coming in the following day. What time?  I ask.  Between 11am and 4pm I am told, as if setting up an appointment with Comcast cable. This is a risk I cannot take, so I check in with mega store Total Wine & Beverage. Bingo! Just landed on the floor is the word, so I head down to the store immediately. $22.99? WTF? Who, besides Belgian Monks, charge that much for a six-pack? After coming this far and all the anticipation, of course I pay.

Let’s talk the anatomy of this Hoplsam. The beer is an Imperial IPA weighing in at 10% ABV and about 80 IBUs (based on a few independent websites, not official).  Bells included six different types of hops into this beer, to include a hefty dry hopping with Simcoe hops. The interesting addition to this big IPA is a “dollop” of honey. This particular six-pack was bottled on January 15, so quite fresh at 2 weeks.

Time to drink up. As usual I am using my tulip glass to ensure I can take in all the aromas which I love in these Imperial IPAs.

The appearance is a cloudy orange with a quickly receding white head.

Aromas are not as strong as I expected considering the 6 hops in there and the dry hopping (not to mention the name).  I definitely detect piney, grapefruit, & floral notes.

The tastes I pick up are earthy, citrus, pine, and all things Pacific Northwest. The honey is evident, which brings a unique touch of sweetness before you are smacked by the bitter finish.  An alcohol taste is present, but far from what you may expect at 10% ABV. 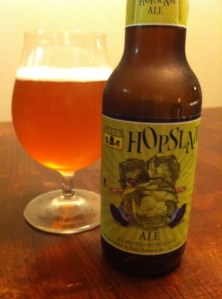 Mouth Feel is somewhat syrupy and chewy with minimal carbonation. It leaves a distinct coating around the mouth leaving me smacking my lips taking in more of that bitter taste.

Overall the only negative I have on this beer is the lack of aromas I look for in my hopped up beers. However, once I got past that I can see the appeal of this brew with its fine use of hops. The addition of honey works well to throw the taste buds before the bitter finish. It makes you want to go back for more and more of this very drinkable 10% ABV IPA. I will give Hopslam 4.5 Mugs out of 5 on the Draft Notes Scale.

Part of me wants to rate this beer a little lower due to the price tag, but it truly is a nice beer. I would recommend trying this if you get a chance, but I think there are equally good choices in the Imperial IPA category at better prices. As usual I am going to suggest one of my favorites Deviant Dales by Oskar Blues; however, Lagunitas Sucks (released in VA this last week too $8.99/6), Dogfish Head 90 Minute, Victory Hop Wallop, and Green Flash Palate Wrecker are fine substitutes at a better price (Most are year round too).

I read this morning that today is “International Stout Day”, news to me although I am starting to see a trend after celebrating IPA day a couple of months back. I just happen to have a highly regarded stout in my refrigerator, so I figure I may as well review it to be festive. The Stout, as you can tell by the title of this post, is Founders Breakfast Stout which is a seasonal (Sep-Feb) Imperial Stout out of Grand Rapids, Michigan.  This beer weighs in with an ABV of 8.3% and 60 IBUs and the bottle lists it as a Double Chocolate Coffee Oatmeal Stout. Founders’ website lists imported and bitter chocolates along with Kona and Sumatra coffees as key ingredients. Based on the description, naming the beer “Breakfast Stout” makes a lot of sense.  As mentioned, this is a highly regarded stout to include a 99/100 rating by Beer Advocate and 100/100 on RateBeer. Based on the excitement from beer lovers and these ratings I decided I need to see what an almost perfect stout tastes like. 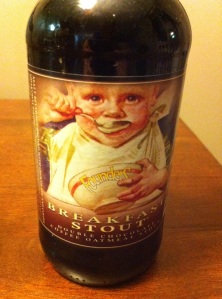 The appearance is a black body with minimal tan head which receded very quickly (I barely had time to take the picture before it was gone). The aromas are what you would expect based on my above description. There is a whole lot of fresh coffee with a dash of chocolate.  Right in line with the description and aromas, the taste is a shot of espresso, chocolate, another shot of espresso, and then a dash more chocolate, There is definitely a bitter finish partly as a result of using bitter chocolates and coffees.  The mouth feel is fairly chewy and I pick up minimal carbonation, but any more would be weird (imagine an ice coffee with carbonation, ick), so it comes together very well.

Overall, this is a beer for coffee lovers and if you also like chocolate you may be in heaven.  At this point of my beer tasting career, I find the excessive coffee taste interesting but I really don’t feel like I am drinking a beer. I would think it would go very well as a post dinner drink with some ice cream or other dessert. Despite my slight issues with coffee in beer, Founders definitely hit the nail on the head with what you would want in a Coffee “Breakfast” Stout. I can’t go perfect, but I would have to give Founders Breakfast Stout 4 mugs out of 5 on the Draft Notes scale.

You can read more about Founders and their beers at http://foundersbrewing.com. Now I need to work out if caffeine stays in the beer through the brewing process and whether I will be able to get to sleep tonight. Cheers!