It has been a very exciting few years for the Washington DC area beer scene with multiple breweries opening doors and pushing out high quality beers. A week or so ago I was excited to take part in a brewery crawl covering three within the small confines of the District of Columbia. The crawl included Chocolate City, 3 Stars, and DC Brau. I have sampled many of the (year round) beers offered by each; however, this was my first visit to each brewery.

Our first stop was at Chocolate City Brewing Company located at 2801 8th Street NE in an old warehouse which they have converted over time from a run-down mess (check out the address on Google street view) into a brewery ready building. Although I forgot to ask once I got inside, it looks like they have added an elevated deck for what I hope will be used for summer tastings.

Outside the brewery was one of the many food trucks you can find around DC. This one today was the El Floridano, serving a few different sandwiches using pork and meatloaf. Food trucks and a brewery are an awesome combination and seem to be the trend in these parts. You will see later, that my biggest mistake of the day was not buying a sandwich.

Upon entering through a garage door style entrance, I was shocked to see how small this brewery actually is. Chocolate City only sells kegs or growlers and those kegs I rarely see on tap at local bars. Based on the small tanks set in the back corner, I see why their output is quite limited. To the right of the brewing equipment, a small table is set up with a couple of taps serving 6 ounce samples.  The brewery website lists 4 beers in their line-up, two of which are available for a free tasting.

The first beer I tried was the Cornerstone Copper, a well balance amber ale. This beer I have seen and consumed a couple of times at DC bars. To be honest I was not impressed the first time I tried it. This batch straight from the brewery was nice and not as I recalled. Turns out, per an impromptu tour by one of the founders, they had some quality issues during the first few batches which they obviously corrected.

The second offering was the Cezveza Nacional Dark Vienna Lager. I had seen this beer mentioned on Facebook and Twitter as “Cerveza Nacional” and I was always confused on why they would produce a Corona style beer. On this day as they pour me a dark lager I am immediately embarrassed of my prior assumptions and I guess you could say stereo types. This is a smooth dark lager with a nice roasted taste which I would classify closer to a German Dunkel (They classify as a Dark Vienna Lager which I guess is close enough to Germany). Maybe I relate it more to Germany as I really wanted to just start drinking it by the liter.

We move on to our next stop a few miles away, 3 Stars Brewing Company at 6400 Chillum Place NW. 3 Stars is located in what used to be an auto body shop amongst a row of industrial buildings and a random little dinner across the street. As we walk up to the entrance the first thing I see is a guy grilling to the side of the entrance, grilling a pork loin to be exact. I was hungry due to stupidly skipping the last food truck, so I had to ask.

Entering the building we come across quite a large crowd in a very spacious warehouse.  In the immediate area the crowd is around about 6 taps with multiple employees pouring samples like there is no tomorrow. One employee is yelling for growler fills to move to the front. I guess paying customers get preference. Interesting concept.  We get in line for ID check and tickets, then in another line for beers. Quite a process compared to our last stop.

I attended the 3 Stars release party at Church Key on 14th St NW over the summer, so I was curious to see what was new. The release party featured variants (Cask, Draft, and some flavor conditioning) of the Pandemic Porter, Southern Belle Brown Ale, and Peppercorn Saison.  Honestly, that particular set of styles is not amongst my favorites, so I was excited to see what new they had to offer. Well, once again we have multiple versions of the Pandemic Porter (Regular, Coffee, & Chocolate Nibs) and the saison; however, a new beer greeted me named Sea Change Pale Ale. 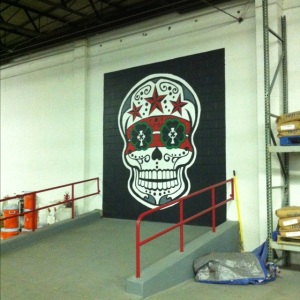 I tried the 3 porters, saison, and pale ale. Unfortunately I got the bottom of the cask Chocolate version of the porter, so I can’t really speak to that, but the regular and coffee versions were solid beers I would drink again. The pale was not very good, I was quite disappointed in this one as I figured it to be my go to 3 Star brew being the Pale Ale fan I am. My favorite was definitely the Peppercorn Saison, which I believe I also enjoyed during the release party.  The thing of it is, there are no pepper corns in this saison and I have no idea where the name came from. So if you get a chance to try it, do not expect to have any pepper notes.  Do expect a quality saison.

During my tastings I decided to take a look around the brewery which is quite open in layout. In the middle are the tanks and brewing equipment and way in the back are some barrels aging some beer. I assume another flavor of the Pandemic, but who knows. One thing that stood out about 3 stars was the home-brew shop within the brewery. 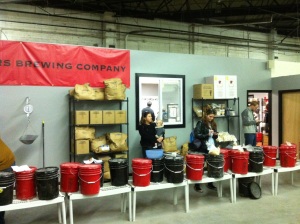 Equipment, hops, barley, bottles, etc. You name it, they sell it. I was surprised to see that the home-brew store had a steady flow of customers and many making purchases.  All of a sudden we are getting kicked out due to DC laws saying they have to close at 4. When the hell do I get some of that pork loin? Apparently never.

Our final stop is a few miles away at DC Brau. Now DC Brau really must not want people to stumble upon the brewery as it is hidden like a CIA safe house.  Located behind a strip mall at 3178-B Bladensburg Road NE, we circled a few times and eventually found the entrance while pissing off a few locals doing u-turns.

We had a private tour arranged for our group of about 20 ($10 each including tastings), so we have the reception area to ourselves as they kick out the other customers for closing time. Growler sales were over and it was about to be our time to taste some of the 14 beers listed on their website. As I get to the bar I am greeted by the friendly staff and given the option of two beers. Are you serious? 2 beers to choose from at the largest brewery inside the District? Which really in not that large, but still! The Public Pale Ale or Penn Quarter Porter is the selection. The Public Pale Ale maybe my favorite local beer and I have gone through my fair share of pints and cans, so I am happy to drink another and I do. I eventually have a porter and am as usual happy with that one too. Nothing new for me on this visit. DC Brau, I am not mad, just disappointed.

After a quick welcome from one of the co-founders we begin the tour, but not before getting another refill.  After about 15 minutes of explanations of mash and grain and the usual, the tour guide recommends we go back for another refill. DC Brau is now back on my good side as this continues for the next hour as we cruise around the facility. In the storage area I spy a bomber of On the Wings of Armageddon, the imperial IPA I was really hoping to get my hands on and try at the brewery. Unfortunately I only go my hands on it and then had to put it back. It was a great tour and we really got to see a lot of the brewery, to include the so called Bat Cave which was storing some future limited release sours doing their time and bacteria that could apparently take down the brewery if it escaped the cave.  FYI, I did not touch that. Upon completion of tour we of course had one more “sample” before parting ways for food – finally.

Overall, I was happy with the brewery crawl and was proud to see some local breweries doing well. Every stop was a slightly bigger operation, but all have a part in the community with a variety of specialties and offerings. Chocolate City was very personal with the owners giving improvised tours, 3 Stars catering to both their consumers and home brewers, and DC Brau catching east coast attention with their hop bomb style.  All in all a promising future in DC beer.

For more information on these breweries, you can find their websites here: